"....Over the last few years, we have worked with them to seamlessly offer our product and services from single proprietor doctor’s offices, to small groups, and ambulatory surgery center, with multiple stake holders…Each challenge that we have brought to their attention has been thoroughly researched, and have collaborated on bringing thoughtful and comprehensive solutions to our clients, and end-users….Our billing resources find its ease of use, and time saved in the handling of patient statements…I can whole-heartedly recommend working with the fine team at ITech workshop in providing seamless integration of billing / practice management into any existing product line."

This is a case study of a Georgia based Gastroenterology (GI) clinic with two providers that processes over 500 claims per month. This clinic is only one of many installations from this Gastroenterology EMR partner, who submitted over 150K claims last year and recovered over $27M from hundreds of payers. This GI clinic looked for a secure cloud-based medical billing software to migrate from legacy software and chose expEDIum Medical Billing. On an average, a GI provider makes over $155K per year. Last year in expEDIum, this GI clinic had submitted claims with a value of about $3.9M and recovered over $591K from several payers resulting in an average of $295K per provider.


iTech migrated this client from their legacy system to eMB. iTech's eMB addressed the main issues faced by the biller effectively.


The providers were able to access their data using secure operator logons, and the clinic administrator had a variety of reports available to her at any time. This installation used Office Ally® as their chosen clearinghouse as their payer list had good coverage of relevant payers. They had also enrolled with all the relevant payers to receive ERAs automatically through the clearinghouse.


As you can see from the above data, the clinic saves over 2.5 person months of data entry per year and makes an additional $18,000 from secondary collection per year. If we assume that a biller's wage is $19/hr, we can see that the clinic saves over $8,300 per year. The clinic is only paying $3240 per year for the software subscription, thus saving them over $23K per year. Currently, iTech is working on cross-over of primary HCFA to secondary UB04 and vice versa and claim cloning from one to another, which will save them additional labor. 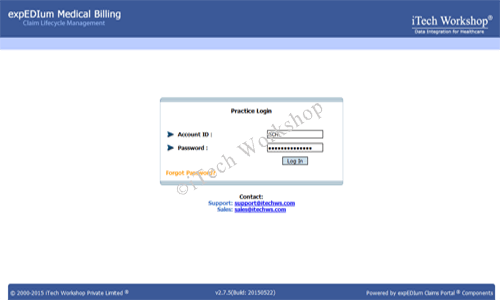